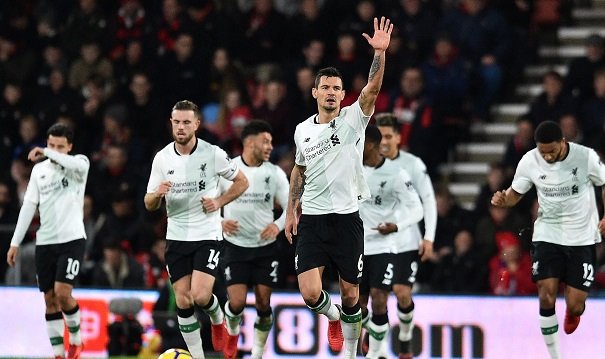 Two draws on the spin saw Liverpool take a bit of a tumble in the table, but after trouncing AFC Bournemouth yesterday at the Vitality Stadium, the Merseysiders are back in the top-four heading in to the hectic run of festive fixtures.

“It’s always great to score a goal but the most important thing is that we showed our quality,” explained Reds defender Dejan Lovren who bagged their second goal on the day. “After two draws, we didn’t go down, we stayed like before. We were concentrated from the beginning, disciplined from the first second and it was a deserved win,” added the Croatian. “They had a couple of chances when we went 2-0 up. But we played really well and cooled down; even in difficult moments with pressure, we had maturity,” enthused the 28-year old, happy to keep their unbeaten run rolling. “It was really great to see everyone up front playing well and Alex [Oxlade-Chamberlain] was brilliant.”

There would be no repeat of the collapse that saw the Cherries fight back from 3-1 down to win 4-3 in this fixture last season as Liverpool cranked up the pressure in a big way on the South Coast. A run of the mill worldie from Philippe Coutinho opened the scoring before Lovren pitched in for the second with a brave diving header. Roberto Firmino headed home the third and Mohamed Salah added his 20th of the season to complete the rout as the visitors ran rampant — smacking four goals with Sadio Mane on the bench.

Keeping the rotation going, Reds boss Jurgen Klopp opted to hold the Senegalese attacker in reserve and called Alex Oxlade-Chamberlain in to the starting eleven. Responding in kind, the 24-year old put in a commanding performance and was just a whisker away from getting his name on the score-sheet. After a slow start to life at Anfield, the former Arsenal man is starting to look at home in the German’s all-action system and with a trip to North London just over the horizon, he’s staked a serious claim to run out at the Emirates Stadium on Friday.

“It will be a special occasion for me, full of emotion I’m sure,” said Chambo when asked about returning to Arsenal for the first time. “We’re in good form and we’ll be going there full of confidence and looking for three points. I hope we can put together a good performance, fight all the way through the game and come out with the right result,” added the Reds midfielder before being asked whether or not he’s hit top gear. “I’ve been doing better and it has been coming, but there’s definitely more to come from me. And I’ll be doing everything I can to bring that out.”