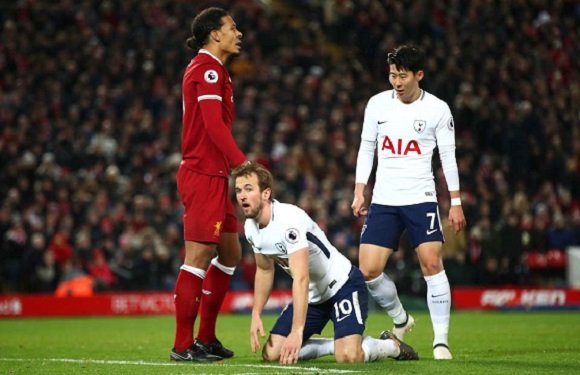 Opinion is always going to be split on the most controversial of calls, but in the fall-out of Liverpool’s disappointing draw with Tottenham Hotspur on Sunday, clear battle lines are being drawn as both supporters and players alike weigh in on the refereeing decisions that highlighted — or blighted, depending on your view — the closing minutes of the match.

“I think the first penalty was offside and I think it is a dive. You see him (Kane) diving clearly and no-one is talking about that,” fumed Reds defender Virgil van Dijk, speaking to the Liverpool ECHO. “There is a lot of discussion about whether it is offside, yes or no, but I think it was offside as well. The referee made his decision together with the linesman. It was good for us that it was saved,” continued the Dutchman. “For the second penalty, I see him coming and I try and hold my leg in, he just pulled his body in front of the ball and he goes down,” added the big centre-back. “The ref said play on and I was very disappointed that the linesman said otherwise. It is a decision the ref already made and the ref is close than the linesman. Unlucky I think.”

Liverpool attacker Mohamed Salah opened the scoring a mere three minutes in and though a much improved Spurs were able to pull themselves level through substitute Victor Wanyama’s thunderous strike with ten minutes left to play, the Egyptian added another spectacular solo effort to bag what should have been the winner.

The controversy surrounding Harry Kane’s first penalty subsided almost immediately after Loris Karius saved his weak effort, but it was brought back to the forefront after Van Dijk appeared to foul Eric Lamela in the box in the final minute of injury time — a call that was initially waved away by referee Jon Moss before he reversed his decision on account of the lines-man. While both decisions have been called in to question by former Premier League referee Mark Clattenburg, until we have VAR in every Premier League game, these debates will continue to be the norm.

“He (Karius) has dived, he got in the way and I’m a player, I’m not going to jump out of the way because it’s football,” said a candid Kane when asked about the first penalty. “I definitely felt contact and I went down,” insisted the Englishman, going on to weigh in on the second call from Moss as well. “I thought the linesman showed amazing character to give (the second penalty) because a lot happened for the first one about the linesman, so to give that penalty was massive – and it was a penalty.”

One thought on “Van Dijk and Kane Disagree Over Penalty Decisions”