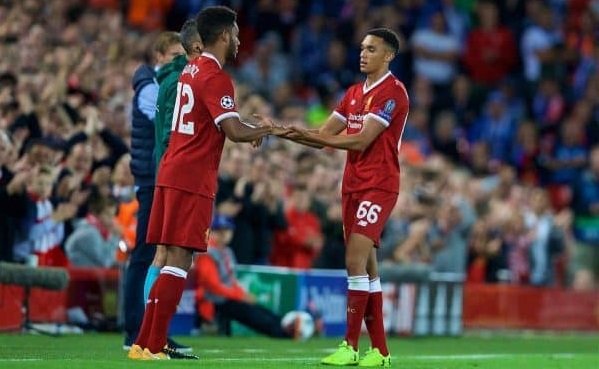 With long term absentee Nathaniel Clyne just around the corner from returning to first team action, there’s about to be increased competition for a spot in Liverpool’s vastly improving defense.

While the young duo of Trent Alexander-Arnold and Joe Gomez have impressed while subbing in for the veteran fullback, they’ll almost certainly take a back seat to the former Southampton man when he’s ready to re-take the reigns. For Alexander-Arnold, that will likely mean a return to the bench, but for Gomez, it could very well mean a shift to a more natural — and preferred — position.

“Joe Gomez is coming from the center more, he will in the future play there,” said Reds boss Jurgen Klopp, confirming that he has big plans for the youngster. “He has to improve,” explained the German manager, hinting that he’s not quite at the level to challenge either Joel Matip or Dejan Lovren for a regular staring spot. “But is more the defensive part for a fullback.”

The arrival of Virgil van Dijk last month has improved Liverpool’s struggling defense in leaps and bounds. Coalescing around the commanding Dutchman, the disorganization that’s plagued them throughout the season is finally starting to be eliminated from their game.

Having him around in training has been a boon to their cause as well — giving not only our attackers an extra challenge at Melwood, but helping his fellow defenders learn by example.

“I think that is a really important thing, to be playing against high-quality players in training and luckily with Liverpool we have that,” explained Alexander-Arnold. “We have bundles of talent,” added the youngster. “Sometimes it is difficult but it’s always learning and trying to improve yourself. If you are doing it in training week in, week out, then come the weekend it is going to be natural.”