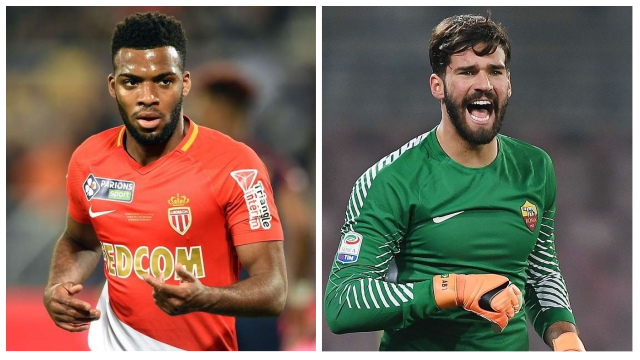 After Liverpool’s move for Lyon attacker Nabil Fekir fell apart, a number of pundits believed that they’d quickly revive their interest in AS Monaco attacker Thomas Lemar, but it looks like they won’t get the chance with the Guadeloupe born speedster set to move to Europa League winners Atletico Madrid for somewhere in the region of £52.7mil — a massive departure from the £90mil fee that the Reds were quoted in January.

Having finally allowed Philippe Coutinho to complete his protracted move to Barcelona, the Anfield outfit looked to reopen talks with the Ligue 1 side over the promising winger only to balk at their exorbitant expectations. While there were suggestions that Jurgen Klopp, who is a known admirer of the still raw 22-year old, would revisit the situation during the summer, Atleti boss Diego Simeone appears to have beat his German counterpart to the punch.

“Atlético de Madrid and AS Monaco have achieved a preliminary agreement over the transfer of Thomas Lemar to our club,” read a statement from the Spaniards on their official website. “Over the next days both clubs will work to close the agreement for the definitive transfer.”

In other news, the Reds proposed move for AS Roma ‘keeper Alisson has taken another twist with the Brazilian reiterating his commitment to the Italian club and insisting that he’s happy in the Eternal City.

Keeping his focus on the World Cup, the 25-year old brushed off almost daily rumours linking him with a move to the likes of Liverpool and La Liga giants Real Madrid despite Roma reportedly putting him on the market with a mind boggling £79mil price-tag.

“I’m focusing on my work with Brazil. People are taking care of other issues regarding Roma. Whatever happens will be for the best,” explained the 25-year old. “I try not to read the news so much. It helps not to read speculation. Nothing official has come my way. I have a contract with Roma,” stressed the Brazilian, putting some distance between himself and the rumour mill. “I’m very happy in Italian football, I’m very happy in Rome.”