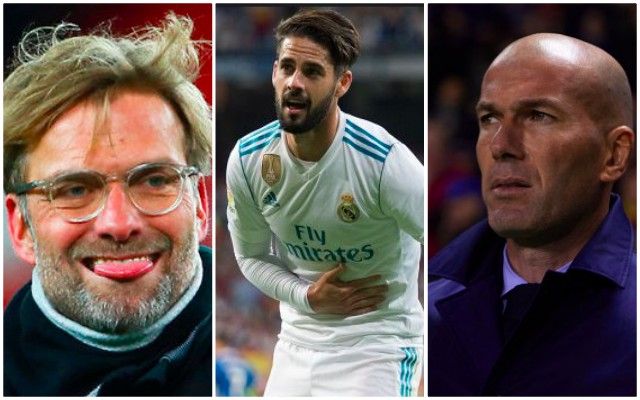 If reports in the media are anything to go by then Liverpool could move to sign Spanish international Isco.

According to El Desmarque, Jurgen Klopp is obsessed with perfection and wants to hire the services of the Real Madrid playmaker. The German manager believes that Isco has the quality to greatly improve the creativity of his squad.

News – Contact made – Liverpool hot in race to secure signing

The Spanish news outlet have mentioned that the Los Blancos have already rejected a bid worth 56 million euros for the La Roja star and will not let him leave for less than 70 million euros (£59million).

Back in November, El Desmarque claimed that the La Liga giants have been looking to sign Paul Pogba from Manchester United and could offer Isco to the Old Trafford club.

At that time, the news source reported that Zidane wants to sell the 27-year-old before his value decreases and the price tag of 60 million euros was mentioned.

Since then, Isco has mainly warmed the bench this season, so, we are not sure, how his market value has gone up by 10 million euros as mentioned above.

The former Malaga star is mainly a central attacking midfielder but over the years, he has played in multiple midfield and attacking positions, even on the flanks (Transfermarkt).

The versatile talente joined the country’s most successful club in 2013 and in the debut campaign, he won the Copa Del Rey and the Champions League under the management of current Everton boss Carlo Ancelotti. Isco has won all the major prizes under Zidane, including three CL trophies.

Unfortunately, this season, the legendary retired footballer has mostly kept the Spaniard on the bench. In all competitions, so far, he has only started 8 times for the 13-time European champions.

As far as the international career is concerned, he made his debut back in 2013 and so far, in 38 appearances, he has directly contributed in 17 goals for his nation (Transfermarkt).

Liverpool have ample quality and depth in their midfield/attack but Klopp has not got a natural central attacking midfielder in his squad. We have not replaced Coutinho as yet but more importantly, we have not missed him at all.

Do you think, a decorated and experienced playmaker like Isco would improve our team? Should Klopp splash £59million to sign him from Real Madrid?