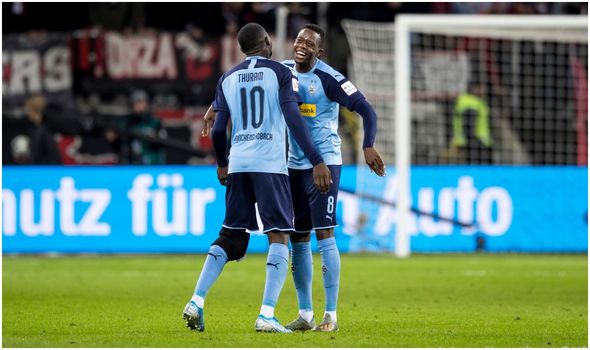 Liverpool have been linked with Denis Zakaria for quite some time and now his Borussia Monchengladbach teammate, Marcus Thuram, is also linked with a move to Anfield.

According to Express.de, Liverpool are eager to sign the German Bundesliga duo in order to cement their supremacy in England as they look to dominate for years.

The German news outlet have mentioned that the Reds could have to pay over 100 million euros (£88million) to secure the signing of the above mentioned stars.

Zakaria is a defensive midfielder, who has so far played 23 games in the current campaign for the German club, scored 2 goals and also provided 2 assists. He can even play in the central defense if needed (Transfermarkt).

The Merseysiders had the best defensive record in the Premier League last term and even this season, they have been brilliant at the back. We have ample quality and depth in our central defense and as far as the defensive midfield is concerned, the likes of Fabinho and Henderson have done well for us.

In such a scenario, do you think that we need to splash the cash to sign another holding midfield star?

Marcus Thuram is the son of legendary French defender Lilian Thuram, who won the World Cup and the European Championships with France in 1998 and 2000 respectively. Unlike his father, the 22-year-old is naturally a center forward, who has directly contributed in 19 goals (10 goals and 9 assists) in 30 starts for Monchengladbach this term.

Manager Marco Rose has even utilized the French U-21 player in the wide attacking positions when needed (Transfermarkt).

At Anfield, Klopp has mainly used Firmino in the False No.9 role and the Brazilian international is not an out and out center forward. In the back-up, we have got Origi, who has not scored a goal since December and the Belgian has mostly played on the left flank this season.

Therefore, the strike-force should be improved in the summer. In your view, should Liverpool splash the cash to sign Thuram?