Liverpool crumbled to defeat against Chelsea at Anfield in the last league game and are now in serious trouble. They could end up playing Europa League next season and need a string of victories to save the campaign.

Next up, the Reds will face Fulham, who were able to earn a point against Klopp’s men at Craven Cottage. Who will come out on top?

As far as the team news is concerned, the Merseysiders have confirmed that Kabak is a doubt for the game against the Cottagers.

In such a situation, we can expect Nat Phillips to return and partner Fabinho in the central defense. Alisson should once again start in the goal and the Robbo and Trent would likely retain their fullback positions.

In the midfield, it is time for Naby Keita to return. The Guinean international should start with Thiago and Wijnaldum.

Firmino’s poor form in front of goal means that he should be dropped from the starting XI tomorrow. In his place, Diogo Jota would likely return to make his first start after recovering from injury.

The Portuguese international should start with Mane and Salah up front. Here is Liverpool’s probable 4-3-3 XI vs Fulham: 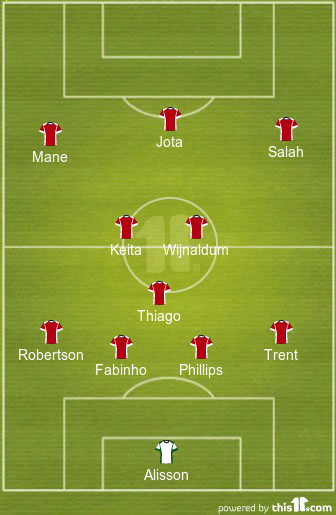