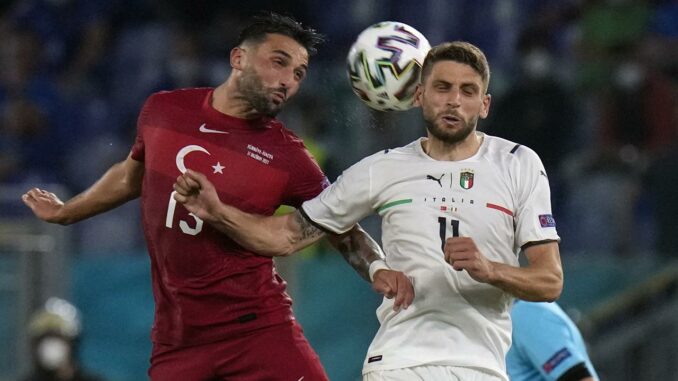 Liverpool are looking to improve their wide attacking positions and are linked with numerous quality wingers. One of them is Italian international Domenico Berardi.

Last month, La Gazzetta Dello Sport reported that the Reds are considering making a move to hire the services of the winger from Sassuolo in the summer transfer window.

More recently, Corriere dello Sport (press image provided below) have reported that the Liverpool have contacted the agent to praise the 26-year-old star and they are ready to move in the auction to secure his signature in this transfer window.

In the last campaign, Berardi, who mainly plays on the right wing, featured in 30 league game for Sassuolo, scored 17 goals and also provided 8 assists.

The Azzurri star was key member of the national team squad that won the European Championships by beating England in the final on penalties. The 17-capped international scored the opening spot kick for the four time World Cup winners.

Overall, the Cariati born winger made six appearances in the competition and provided assists in the opening two group games against the likes of Turkey and Switzerland respectively.

Berardi’s current contract with the Italian side will expire in 2024 and after his heroics at Euro 2020, he would surely not be available for cheap. CdS claim that his market price is at around 40-45 million euros. On the other hand, as per a recent report covered by La Gazzetta Dello Sport, the valuation has now risen to 50 million euros (£43million).

At Anfield, Salah, our reigning Player of the Year, is the first choice right winger and the second choice is Shaqiri, who was impressive at the Euros for the Swiss side but for Liverpool, he has mostly warmed the bench or spent time on the treatment table since 2018-19 season.

On the other hand, we do not have an adequate cover for Mane as well. Therefore, a top winger should be lured for next season. Do you think Liverpool should splash £43million to sign Domenico Berardi?