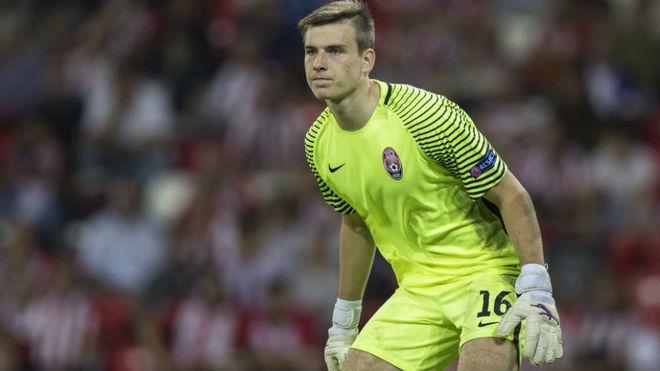 If reports in the media are anything to go by then Liverpool are interested in hiring the service of Ukrainian international, Andriy Lunin.

According to Spanish source, Nacional, Liverpool are in talks with Real Madrid to close the signing of the 22-year-old player to reinforce their goal keeping department.

It is stated that Jurgen Klopp asked for his signing and if approved, agreement will be reached with the Los Blancos and the young shot stopper would be moving to Anfield for a fee of 20 million euros (£17million).

Lunin was signed by the La Liga giants in 2018 but since then, he has mainly spent time on loan with different clubs. He only made his debut for Madrid in the Copa del Rey last season. This term, he has so far made 2 appearances, both in the Copa del Rey. He played for full 90 minutes vs Elche last night.

As far as his international career is concerned, the former Dinipro goalie was a key member of the Ukrainian side that won the U-20 World Cup in 2019. For the senior side, he made his debut in 2018 and thus far, he has made 6 appearacnes.

Alisson Becker is the irreplaceable first choice goal keeper at Anfield and to cover for him, we have a highly talented youngster in the form of talented, Kelleher, who has done brilliantly for us in the cups this term. We also have 19-year-old Pitaluga who joined the club in October 2020.

It must be taken into consideration that the likes of Adrian and Karius will be out of contract in the summer and would leave the club.

In such a situation, should Liverpool sign a new goalie to reinforce the department? Should they close signing of Andriy Lunin for £17million?

One thought on “Report – Liverpool in talks to close £17million signing”