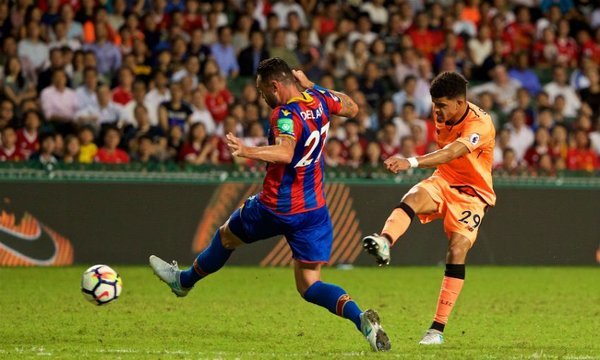 Looking set to make his senior England bow after being drafted in from the Under-21 side by Three Lion’s boss Gareth Southgate, Liverpool striker Dominic Solanke has admitted that he was “surprised” by the call, but he’s more than ready to take advantage of the “crazy” opportunity.

“It came as a surprise, really, but anything can happen as a footballer,” said the Reds youngster. “Football can change quickly so if you get an opportunity, you have to take it. Football is all about confidence and belief, and if you believe in yourself and you get an opportunity than all you can do is take it,” added the 20-year old. “It’s crazy, really. It’s every boy’s dream and to play at Wembley against a great nation like Brazil, so it will mean a lot.”

A whole slew of injuries to players like Tottenham Hotspur goal machine Harry Kane and Liverpool skipper Jordan Henderson has lead to Southgate drafting some fresh faces in to the England squad — including calls for fellow youngsters Lewis Cook and Angus Gunn.

Although he’s only made one start for the Reds this season, there’s no question that Solanke knows how to find the back of the net — especially on the international scene. Securing the coveted Golden Boot as the England U-20 side lifted the World Cup, the up and coming striker staked a claim for a spot with the big boys as he left Chelsea fans rueing his free transfer to Liverpool over the summer. Having handed out five debuts in the draw with Germany on Friday, Southgate has hinted that there could be more to come when Brazil visit Wembley on Tuesday.

“Those guys have fitted in off the field which helps them to fit in on the field,” said the Three Lions boss, speaking to the BBC. “They are good players so in training they look fine,” added Southgate, confident in his decision to give Solanke, Cook and Gunn their shot. “They have got good pedigree and we won’t hesitate to put them on the pitch.”