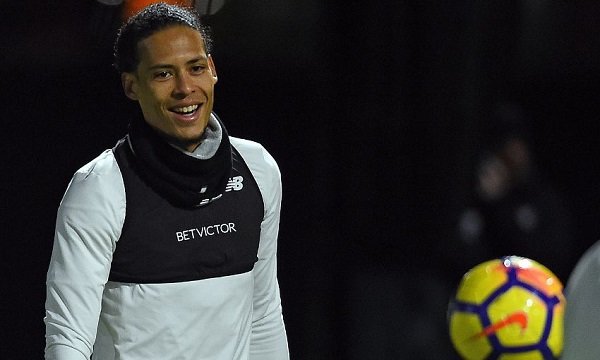 Having already admitted that it’s taken him some time to adapt since moving to Liverpool from Southampton last month, Virgil van Dijk has told BBC’s Football Focus program that training under Reds boss Jurgen Klopp is a vastly different experience than what he experienced on the South Coast.

“I am getting used to how we play,” said the Dutchman. “The intensity of our game is a lot higher than what I was used to,” explained 26-year old. “Every day here is tough. We work very hard, run a lot and there is a big difference. I needed to step up my game, especially in the beginning,” added van Dijk, going thanks for gaffer for helping him with his game. “Klopp is very good and an amazing guy as well. A lot of the attributes he has makes us achieve good things in the future.”

It’s been a bit of a change for the Netherlands international; while the Saints languish in the lower echelons of the table, Liverpool have one foot in the quarter-finals of the Champions League after thrashing FC Porto and are a mere two-points off Manchester United in second place.

Taking steps to shore up things at the back, the addition of van Dijk has brought a stability to the Reds defense that we haven’t seen in years, but the crux of their game remains their attack. Philippe Coutinho’s move to Barcelona last month hasn’t stopped the Merseysiders one bit as Sadio Mane, Mohamed Salah and Roberto Firmino continue to score seemingly at will with the Brazilian in particular upping his game in a real big way.

“The moment we live here [at Liverpool] is very good in the Champions League, and also the Premier League,” said Firmino, speaking to SporTV. “So yes, I would say it is my best phase here,” added the Reds attacker, going on to stress that he has to keep doing the business domestically if he wants to head to Russia with Brazil this summer. “It is very gratifying to know that [Tite] will count on me, as I see in the media, but for me, I just await the call. If I do not continue doing my job here at Liverpool, [I won’t be called up]. I just keep doing what I am doing. I just want to think about now, not tomorrow.”