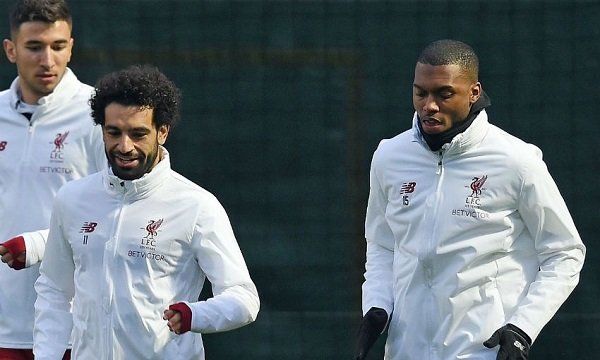 After missing Liverpool’s last two matches with a slight knock, Reds attacker Mohamed Salah will be back in the starting eleven when Premier League leaders Manchester City visit Anfield on Sunday and while there may be a role for Daniel Sturridge to play, club captain Jordan Henderson is still a ways away from returning to full training.

“If nothing happens in this moment, Mo is back, he is training completely normally,” said Liverpool manager Jurgen Klopp, speaking to the press at Melwood. “[Sturridge] is back in training, healthy and on the way to be fit again,” added the German manager before turning his attention to the skipper. “Hendo is in this moment out on the pitch and is training. It looks good – he wears football boots, that is always a good sign. He was not in team training so far.”

After getting a spanking earlier in the season, the Reds will be looking for some measure of revenge when Pep Guardiola’s side roll in to town this weekend. Unbeaten thus far this season, the Citizens look almost certain to lift the Premier League trophy come May, but Liverpool have ambitions of their own and picking up full points on Sunday would not only do them a world of good in the race to secure a spot in next season’s Champions League, it’ll also give them a much needed morale boost after Philippe Coutinho moved to Barcelona last week.

If they want to get anything out of this match, they’re going to have to match City going forward — and if there’s any team that’s capable of doing that, it’s Liverpool. With that being said, they’ll also have to keep things tight at the back. Virgil van Dijk, who put in a masterful performance in his debut against Everton, will go a long way towards doing just that, but the Reds will still be without Alberto Moreno as he continues his recovery from an ankle injury.

“Alberto Moreno was in team training yesterday, the first full session. He is a little bit early but after that he should be ready. He needs time for proper training of course,” explained Klopp, taking a cautious tone when speaking about the Spaniard. “The boys really do a lot in their rehab situation and, if we have time, we bring them a little bit later into team training so that they can do a little bit more specific physical work,” said the gaffer, expanding a bit further on their rehab methods. “But still they need time to adapt to the intensity of a football game. It looks really good, cool.”